An Architect of the Education system- Rahul Singhi

Mr. Rahul Singhi is a graduate in architecture & holds a post graduate certificate in Family Managed Business from SPJ Mumbai in 2015. He is an executive committee member of the Young Indians which is an integral part of the Confederation of Indian Industry (CII). He’s also an Advisory Board Member of AIESEC in Jaipur, which is the world’s largest non-profit youth-run organization.


I was eager to talk to Rahul, who is an optimistic person looking for innovations to excel at work. He was extremely courteous and it was great learning about his life journey. Within a short span of time, Rahul has crossed many milestones and aims to do the best for the future.


Rahul always believes in giving back to society. He likes to share knowledge and information with others. Having begun his journey as an Architect, he says it’s in his genes and it runs across his narrative. He did his B.Arch. in 2011.  Subsequently he did his life’s first and probably the last project where he performed the role of a draftsman and practiced his learning of Architecture to build Poornima University (2011-12)


Rahul is inspired by his father and mentor, Ar. Shashikant Singhi who spent many years in Education system. Deeply influenced by the hard work, struggle and the dedication of his father, he thought to follow in his father’s footsteps with modern thoughts and technologies to bring a change in the Education system. In 2013, He decided to pursue Post Graduate program in Family Managed Business. Getting a Degree along with the Job is not a simple task for anyone. It requires management skills which Rahul has in plenty.


Rahul gives immense importance to education and health. He believes in practical exposure and freedom to experiment with learning. With modern tools and technology, he wants to raise the Education and Health standards of the country. They have also started a Hospital in Jodhpur named as Medipulse Hospital for better health standards in western Rajasthan. It is amazing to watch the video of the 59th Annual NASA Convention which was held in 2017 in Poornima University under Rahul’s stewardship. (The video is on Youtube)


When asked about the greatest challenge and memorable moment, Rahul said that the greatest challenge was to manage his professional, personal and educational life. While pursuing FMB at SPJIMR, he was blessed to be a father. He strived to balance studies, family and work. The memorable moment shared by him brought a smile to my face. He said it was the time when he heard that he is blessed with a beautiful daughter, Jiana who is four now. Rahul likes to share his work with her taking her along with him for meetings and presentations. He treats his daughter as an adult. His daughter sometimes forces him to let her attend the meetings and do discussions! What a great inspiration to a young daughter! He thinks while spending time with his daughter, he maintains his work-life balance.


In addition Rahul is a social media freak. He is active on all social media apps like Facebook, Twitter, Instagram and LinkedIn. He shares his ideas and thoughts through social media. He has also taken formal training in the subject.

It is inspiring that Rahul in spite of having a packed schedule takes out time for his passions. On Sundays he would either do photography or go for a long ride. He owns the dream bike of the youth, A Harley Davidson. The longest he rode was from Jaipur to Mumbai. Apart from these two things, he is generous and kind. He does social work too. He along with the students of the University teaches students of the village areas and provide them study materials in the school named Poornima Paathshala. He is also keen on sports.

Rahul said that the message he would like to pass on would be to spread knowledge. He has always believed in giving what he is gifted with.

I am sure Rahul, we have learnt a very good message from your life journey and hope this continues as a chain for betterment of the society and the world at large.

After speaking to you I felt so motivated and I wish all the very best for your future. As said by you – We will surely meet on roads one day, passing by. 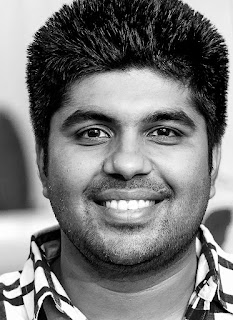